Working on lighting and composting my workshop 6 assignment of iAnimate from December with the scared guy in the castle.

Often when making video reference its hard to see how the body is moving in certain angles because of the foreshortening of the arms or legs. Or an arm is covered by the body in certain poses.

In those instances it would be nice to have video reference of different angles of the same action. I experimented with this with my last shot and it worked pretty well for me.

I used a two camera setup with a flipCam, and my old videocamera but you can use as many camera's, or phones with video function as you like.

Step 1.
Place al the props and place your camera's. When you are ready for your acting performance, start all the separate camera's. To be able to sync all camera's later you can either switch the light on and off or make a fast movement with your arm or something else so you have a reference point when you edit the video's later.

Step 2.
Do your acting performance.

Step3.
Stop all the camera's. Download all the different footage to your computer.
In quicktimePro or your video editing program look for that reference point and cut the first part of the video.

Step 4.
You can stitch the videos together in your favorite video editing software like a comparison reel. Now you can look at the same performance from different angles.

Extra step, you can import the video, or if you like, an image sequence of your footage into Maya so when you step trough your keyframes the footage will show the according frame.

Quick and easy. Hope it was helpful.

Testing out UV layout and shaders 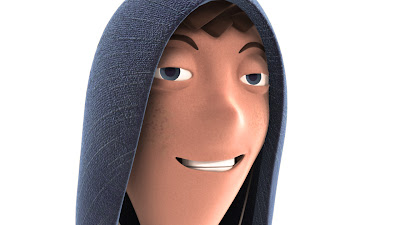 After some searching for good UV layout programs I finally bought UV layout yesterday and I must say it's a breeze to work with in combination with Maya. Previously I used flat colored shaders most of the time because of my limited knowlegde about UV's. The most important thing i still need to learn is where to place the seams and texturing in photoshop. The new version of Zbrush with the UV master plugin seemed like a nice quick solution but I love the control of creating seams and cuts myself and have more control on the flattening proces too.

Here is a quick rendertest I did of an character I created for an old project.
Gepost door Joost van Schaik op 04:16 2 opmerkingen:

Exploring some new techniques to render in a 2D kinda style. The textures are painted in photoshop and mapped on the simple cylinders just for testing. Very curious how this style will work when I put these kind of textures on a character.

Only one light is used for the shadowlayer. No lights used in the scene. Did Some additional adjustments in Photoshop to enhance the contrast. 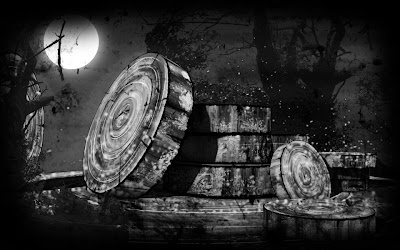 Here is a movie with my curent eye setup for my new character. I wanted to create a separate set of eyes that I can attach to the head rig with locators. This way I will have a flexible setup so I can move the eyes around freely.

All the attributes for shaping the eyelids and pupil dialation are in the eye controllers and can be adjusted in the channelbox.

After hearing a lot of people talking about creating a fresh reel with your own characters I decided to dive in the world of rigging too. I had some mixed feelings about this because it's hard enough to become a good animator and your really need to spend a lot of hours to improve. (Thinking about the 5.000 hours Shawn Kelly was writing about in his blog before).

But on the other hand, it think it's a good thing for an animator to understand that rigging thing some more too and to be able to communicate well with the technical departments. At the moment I am working my way trough the Jason Schleifer rigging tutorial. And I am surprised how clear he explains everything in a way an non tech guy like me can understand all this. I already knew he's a great teacher at Animation Mentor but never expected that these DVD's were so clear and thoroughly documented. Really great stuff.

At first I wanted to try to rig with auto-riggers, and that could work great too, but than I would not expand my knowledge on this subject. So that's why I decided to take this rocky road and fill my brain with new stuff and have fun along the way.

Here is the character I designed. Did some facial tests in Maya too. It's still a work in progress.

Based my new knowledge I am going to finish the model try to create a rig from scratch for this dude. Just wish me good luck the next few weeks. I think I am going to need it:-) 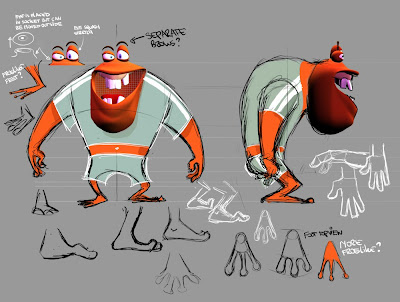 Frames from the first movie

First rendered frames after some compositing. Thinking changing the window colors of the cars and maybe the colors of the shirt of the girl to make here stand out some more. 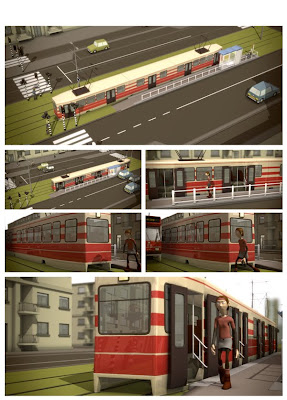 Another rendertest to get the right atmosphere. Still not not happy about the blue-ish windows of the tram and the houses. But everything is coming along now. 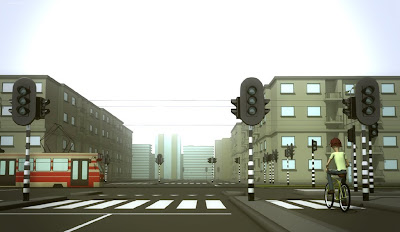 A rendertest of the tram I created for this project. Thinking of making the body of the tram somewhat reflective to give it some more life. 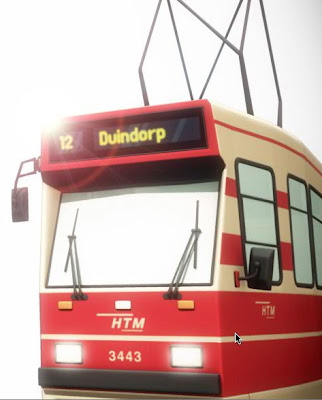 A rendertest for one of the scenes. You just have to imagine the the blue cube on the left is a car passing by pretty close. 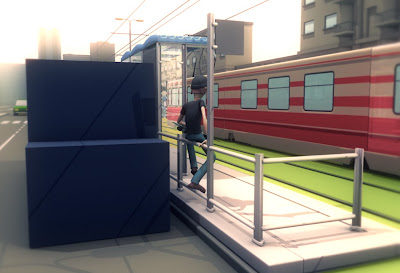 First design for the overview of the city. 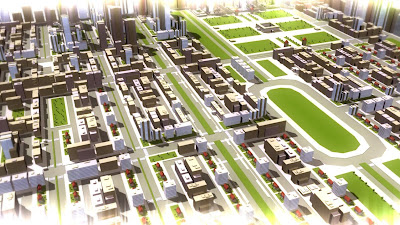 The girl character is mostly finished now. I added some blend shapes and did more weight painting today. So it was time to test her in a pose looking very scared when the tram can't avoid her anymore. Some additional blendshapes will be added when I start the animation for this project. It's time for the second character first. 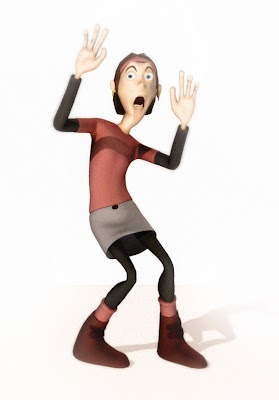 Halfway creating the models for the environment now. Here is just a testrender in duotone for fun. The final project will be done in color but its always fun to experiment with colors and filters and discover new moods. The car is still a work in progress.

Just one extra for today.The girl is standing a little to high on the platform so there is some space between her feet and the platform. Maybe she borrowed her shoes from Astro boy. In that case, why should she need a bike then :-).

Finally an occlusion render to show how the girl looks in a setting. I gotta do some extra weight painting on the girl to fix some areas but overall I am happy with the progress. 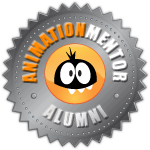